WASHINGTON (ABC7) — Hajime Rojas of Fairfax, Virginia only had her 2019 Chevy Bolt for 18 months before it went up in smoke on the Fourth of July.

The $43,000 electric car caught fire in the parking lot of her parent’s home during a family get-together.

“I was seeing smoke just growing and growing and getting bigger and bigger behind the car,” Rojas says. “When you see that, I mean you don’t know what’s going to happen.”

Rojas called 911. There were no visible flames, but enough heat was generated to melt the backseat and some plastic electrical parts. Rojas’s insurance company declared the car a total loss and towed it to a salvage yard on Fredericksburg.

Firefighters didn’t tell Rojas what caused the fire, but they did want to know the location of the car’s lithium ion battery.

The 2019 Bolt has a five-star government safety rating. But after some online digging, Rojas found several other Chevy Bolts that were destroyed in fires. Armed with that new information, Rojas asked General Motors to investigate her case. But GM refused, saying it was now in the hands of her insurance company. 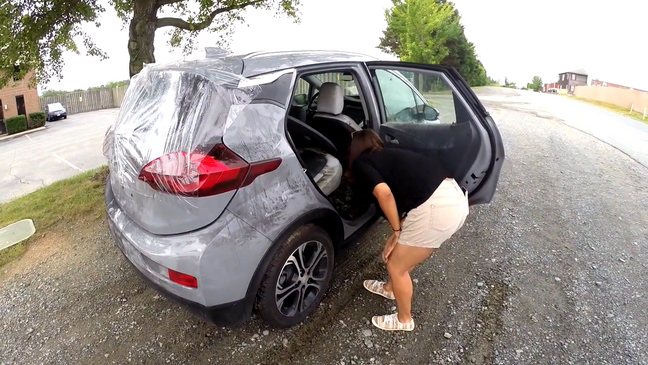 Hajime Rojas of Fairfax, Virginia only had her 2019 Chevy Bolt for 18 months before it went up in smoke on the Fourth of July. (ABC7)

“My point was don’t you want to know what caused this?” she asked.

Frustrated, Rojas called 7 On Your Side. We reached out to GM and told them Rojas’s story. Now the auto giant says they will investigate.

“It’s called a lithium ion battery because lithium ions move from one electrode to the other.”

Dr. Eric Wachsman is an engineering professor and Director of the Maryland Energy Innovation Institute. He also drives an electric car.

Wachsman says lithium batteries do contain a flamable liquid. he says the technology is safe, as long as the battery is not pushed passed its limit or has a defect.

“But there’s just going to be some statistical variance in every little aspect of it that can cause, every once in a while, this to happen. Very rare, but it does happen,” Wachsman says.

Rojas says she doesn’t know why her car overheated. She wants answers and won’t stop asking questions until she gets some.

“If I don’t say anything and I hear later on that this happened to someone else, I’m going to feel like I had a chance to say something and I didn’t,” Rojas says.

Rojas has also gotten the attention of NHTSA, the National Highway Transportation and Safety Administration. The government agency says it is aware of the incident and is evaluating it. It seems Rojas’s persistency is making a difference.